Math education has fascinated me for a very long time. I was always good at arithmetic and despite having a pretty bleak elementary school experience, I could do what they called, “math.” Test scores in the 6th grade indicted that I was mathematically gifted and earned me a place in something called Unified Math. “Unified” was an accelerated course intended to rocket me to mathematical superiority between grades 7 and 12. Rather than take discrete algebra, geometry, trigonometry, etc., Unified Math was promised as a high-speed roller-coaster ride through various branches of mathematics.

Then through the miracle of mathematics instruction I was back in a low Algebra track by 9th grade and limped along through terrible math classes until my senior year in high school. In 12th grade, I enrolled in a course called, “Math for Liberal Arts.” Today this course might be called, “Math for Dummies Who Still Intend to Go to College.” I remember my teacher welcoming us and saying, “Now, let’s see if I can teach you all the stuff my colleagues were supposed to have taught you.”

This led to two observations:

Two things I learned in school between 7th and 12th grade kept me sane. I learned to program computers and compose music. I was actually quite good at both and felt confident thinking symbolically. However, majoring in computer science was a path closed to me since I wasn’t good at (school) math – or so I was told.

I began teaching children in 1982 and teachers in 1983. I was 18-19 years old at the time. While teaching others to program, I saw them engage with powerful mathematical ideas in ways they had never experienced before. Often, within a few minutes of working on a personally meaningful programming project, kids and teachers alike would experience mathematical epiphanies in which they learned “more math” than during their entire schooling.

In the words of Seymour Papert, “They were being mathematicians rather than being taught math.”

Teaching kids to program in Logo exposed me to Papert’s “Mathland,” a place inside of computing where one could learn to be a mathematician as casually as one would learn French by living in France, as opposed to being taught French in a New Jersey high school class for forty-three minutes per day.

I met Seymour Papert in 1985 and had the great privilege of working with him for the next 20+ years.

Papert was a great mathematician with a couple of doctorates in the subject. He was the expert Jean Piaget called upon to help him understand how children construct mathematical knowledge. Papert then went on to be a pioneer in artificial intelligence and that work returned him to thinking about thinking. This time, Papert thought that if young children could teach a computer to think (via programming), they would become better thinkers themselves. With Cynthia Solomon and Wally Feurzig, Papert invented the first programming language for children, called Logo. That was in 1968.

What makes Papert so extraordinary is that despite being a gifted mathematician he possesses the awareness and empathy required to notice that not everyone feels the same way about mathematics or their mathematical ability as he does. His life’s work was dedicated to a notion he first expressed in the 1960s. Instead of teaching children a math they hate, why not offer them a mathematics they can love?

As an active member of what was known as the Logo community, I met mathematicians who loved messing about with mathematics in a way completely foreign to my secondary math teachers. I also met gifted educators who made all sorts of mathematics accessible to children in new and exciting ways. I fell in love with branches of mathematics I would never have been taught in school and I understood them. Computer programming was an onramp to intellectual empowerment; math class was a life sentence.

It became clear to me that there is no discipline where there exists a wider gap than the crevasse between the subject and the teaching of that subject than between the beauty, power, wonder, and utility of mathematics and what kids get in school – math.

Papert has accused school math of “killing something I love.”

Marvin Minsky said that what’s taught in school doesn’t even deserve to be called mathematics, perhaps it should just be called “Ma.”

One of our speakers, Conrad Wolfram, says that every discipline is faced with the choice between teaching the mechanics of today and the essence of the subject. Wolfram estimates that schools spend 80% of their time and effort teaching hand calculations at the expense of mathematics. That may be a generous evaluation.

Over the years, I’ve gotten to know gifted mathematicians like Brian Silverman, David Thornburg, Seymour Papert, Marvin Minsky, and Alan Kay. I’ve even spent a few hours chatting with two of the world’s most preeminent mathematicians, John Conway and Stephen Wolfram. In each instance, I found (real) mathematicians to embody the same soul, wit, passion, creativity, and kindness found in the jazz musicians I adore. More significantly, math teachers often made me feel stupid; mathematicians never did.

The 1999 National Council of Teachers of Mathematics Standards said, “50% of all mathematics has been invented since World War II.” This is the result of two factors; the social science’s increasing demand for number and computing.

These new branches of mathematics are beautiful, useful, playful, visual, wondrous, and experimental. Computing makes some of these domains accessible to even young children, and yet you are unlikely to find the likes number theory, chaos, cellular automata, fractal geometry, topology… in the K-12 math curriculum.

Hell, I dream of a day when a math textbook uses the symbol for multiplication used on computer keyboards for a half century. It makes my head explode when a high school student doesn’t know how to ask a computer to multiply two numbers.

Since No Child Left Behind, parents, politicians, and educators have been engaged in a death match known as the Math Wars. The prescribed algorithmic tricks proscribed by The Common Core have thrown dynamite on the raging fire about how best to teach math. Ignorance, fear, and superstition are a volatile brew and impediment to learning.

Conrad Wolfram estimates that 20,000 student lifetimes are wasted each year by school children engaged in mechanical (pencil and worksheet) calculations. Expressed another way, we are spending twelve years educating kids to be a poor facsimile of a $2 calculator. Forty years after the advent of cheap portable calculators, we are still debating whether children should be allowed to use one.

We are allowing education policy and curriculum to be shaped by the mathematical superstitions of Trump voters. Educators need to take mathematics back and let Pearson keep “math.”

When Barbie said, “Math is hard,” the politically-correct class expressed their faux outrage, but Barbie was speaking a ubiquitous truth only tacitly acknowledged by the brave or those severely damaged my school math. If math is hard, fixing mathematics education is even harder.

Study after study tell us that kids hate math, computers are less likely to be used in a math class than anywhere else in school, teachers have little confidence in their own mathematical abilities and were poor math students, formidable gender gaps still exist – even the stupid test scores by which some measure “achievement” are static or worse.

Faced with an abundance of research, personal history, and good old-fashioned intuition while screaming from the rooftops that math education is a shambolic failure, we just double down on what does not work.

Against this backdrop of panic, misery, and despair there is room for optimism.

There is a renewed attention being paid to the importance of S.T.E.M. and S.T.E.A.M.

We live in a complex society awash in data. Citizenship depends on strong mathematical thinking and modeling skills.

Computational power has never been cheaper, easier to use, or portable. Today, you can ask your phone any question found in the K-12 math curriculum and receive an immediate answer. It can even “show all work.” How will math education respond to this reality?

The maker movement has reenergized timeless craft traditions and supercharged such creative human expression with new tools and computational materials.

Kids are miserable. Parents are fed-up. They are not only opting out of standardized testing, but rejecting that which is tested and the way it is taught.

Why Progressive Educators Should Care About Reinventing Mathematics Education

I had a conversation with Dr. Papert in 2004 in which he was on-fire about the need to revolutionize math education with all the urgency our society can muster. When I asked if his focus on math education was because he was a mathematician, Papert rattled off more than a dozen reasons why this was a priority.

One argument in particular stayed with me while I have forgotten others.

Papert said that no pedagogical innovation of the past century has had any real impact on math education and if that were not disconcerting enough, it ultimately meant that in practice, no matter how progressive or learner-centered a school aspired to be, there was one point in the school day when “coercion was reintroduced into the system.” Math class was when kids felt badly about themselves and were being taught irrelevant tricks they might need one day.

Papert argued that this scenario was corrosive to any other constructive efforts undertaken by a school, eventually undermining efforts like project-based learning, authentic assessment, student led inquiry, and other aspects of constructivist teaching. There is no way to make a noxious math curriculum more palatable.

Papert would ask how math class could feel more like art class, where students would become lost in their work, think deeply, act creatively, and produce an artifact they were proud of?

Our January 4th event, Reinventing Mathematics Education, assembles experts and practitioners together in Los Angeles for an action-packed day of learning by doing and conversations on how to proceed.

Most discussions of math education define “reform” as devising a clever new teaching trick or test intended to fix the kid and make them understand what’s in a textbook relatively unchanged since the advent of movable type.

Dr. Constance Kamii brings a lifetime of research on how children construct arithmetic understanding through play, thinking, arguing, and problem solving without being taught algorithms by the teacher. Her decades worth of peer-evaluated research and clever classroom strategies are deeply rooted in her fifteen years of work with Jean Piaget. Despite her diminutive physical stature, Kamii is a giant in the field of how teachers can create the context for student learning.

Dr, Ilana Horn is of a different generation and active in social media. Her work is centered on creating a productive context for learning and how older students can be supported to learn mathematics in a collaborative climate that fosters sustained habits of mind.

Conrad Wolfram is a mathematician, computer scientist, and educator who works with his brother Stephen, considered one of the world’s greatest living mathematicians and scientists, at a company inventing many of the computational tools being used to propel science, mathematics, engineering, and the social sciences into an exciting and uncertain future. Conrad Wolfram is the force behind Computer-based Mathematics and works tirelessly to design materials that schools can use to bring real mathematical power to each child. In the words of Seymour Papert, Wolfram is “creating a new diet of mathematics for kids.”

This event would not be possible without the leadership and generosity of my school, The Willows Community School. My colleagues understand the enormity of the task associated with teaching kids for their future, rather than our past. The January 4th event is a professional development day for the entire Willows faculty and we are inviting you to join us for a one-of-a-kind world-class event. 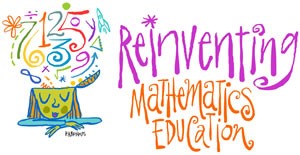